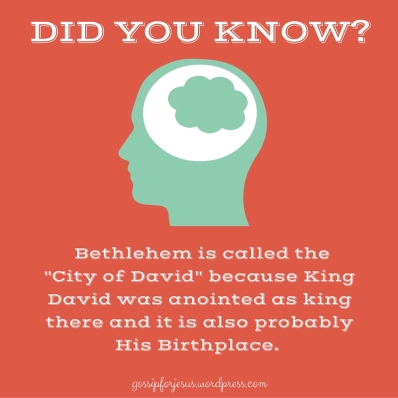 Bethlehem is called the “City of David” because King David was anointed as king there and it is also probably His Birthplace.

And Joseph also went up from Galilee, out of the city of Nazareth, into Judaea, unto the city of David, which is called Bethlehem; (because he was of the house and lineage of David

The city of Bethlehem, located about six miles southwest of Jerusalem, is the birthplace of our Savior Jesus Christ.

Bethlehem was also the renowned City of David. It was there in young David’s hometown that the prophet Samuel anointed him to be king over Israel (1 Samuel 16:1-13).

The story of Naomi, Ruth and Boaz from the book of Ruth is set primarily around the town of Bethlehem.

King David, the great-grandson of Ruth and Boaz was born and raised in Bethlehem, and there David’s mighty men lived. Bethlehem eventually came to be called the City of David as the symbol of David’s great dynasty, and it grew into an important, strategic, and fortified city under King Rehoboam.

However, by the time of Jesus’ birth, Bethlehem had declined in significance to a small village. The three gospel accounts (Matthew 2:1–12, Luke 2:4–20, and John 7:42) all report that Jesus was born in the humble town of Bethlehem.

There is a close association between King David and Jesus Christ, the Son of David (Matthew 1:1). Both were born in Bethlehem and died in Jerusalem. Both came from obscurity to be kings. Both were devoted to God. Jesus was a descendant of David (Revelation 22:16) from the tribe of Judah, where David first reigned.

The book of revelation reveals that the City of David is the place where Jesus is to reign in the future.

••• Note that Bethlehem is now under the Occupied Palestinian Territories, meaning Jesus was born in Palestine not Israel. Although, Palestine is not a recognised state and at the time of Jesus’ birth it was Israel anyways.